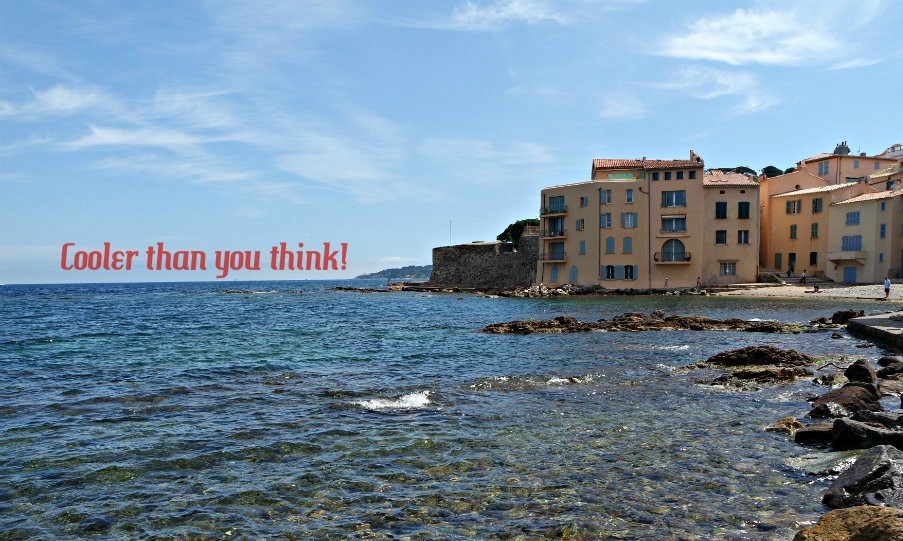 Before, when I thought of Saint Tropez, I thought about clubs, yachts and expensive cars! I was thinking about very rich people and bills of thousands, maybe hundreds of thousands of euros. I imagined Saint Tropez a place with a lifestyle that I would never adopt. But I was about to find out that the reality was very, very different!

When Ana and I came up with the idea of visiting the French Riviera, I was a bit worried and spent some time thinking if it really was worth it. I thought that we are not fitted for that kind of city, having in mind that the fancy clubs, restaurants and yachts are not things that represent us. We have a different kind of lifestyle. We’re the ones searching for new and undiscovered places, tourist free, with interesting stories to discover. We are the ones searching to connect with nature, not with the Moet bottle. 🙂 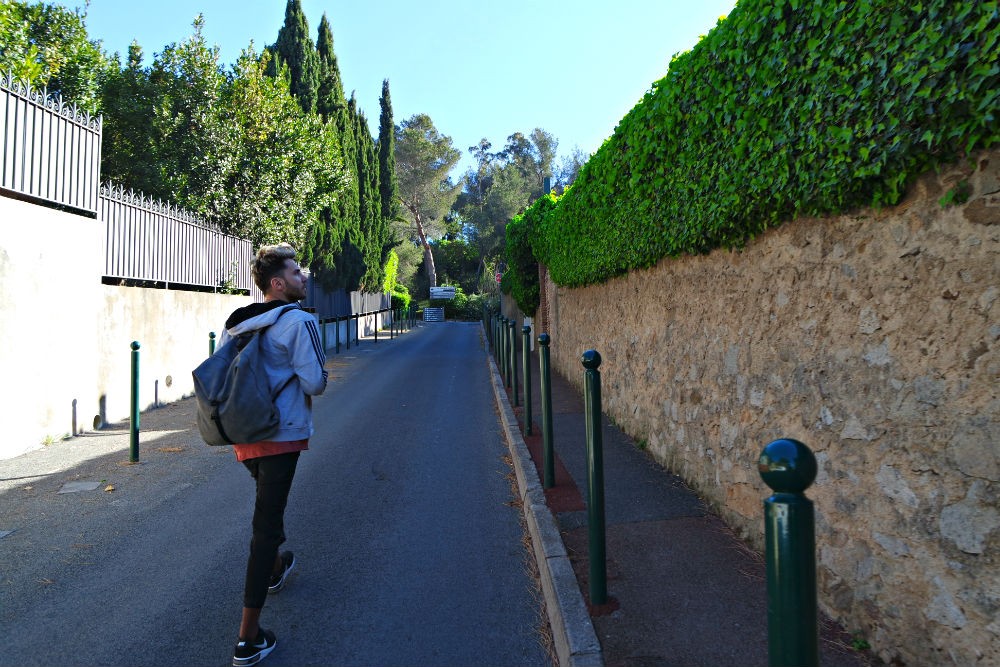 Finally, we came to the conclusion that the entire Provence region and the French Riviera deserve a visit. Atfer all, why eliminate such a beautiful place just because of Saint Tropez? 🙂 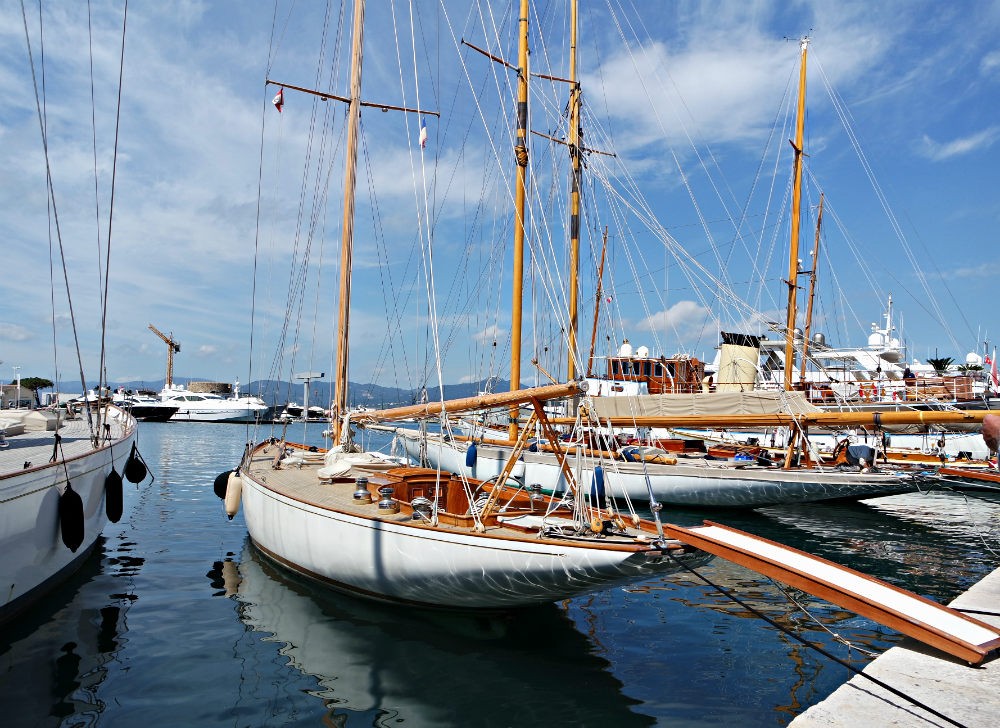 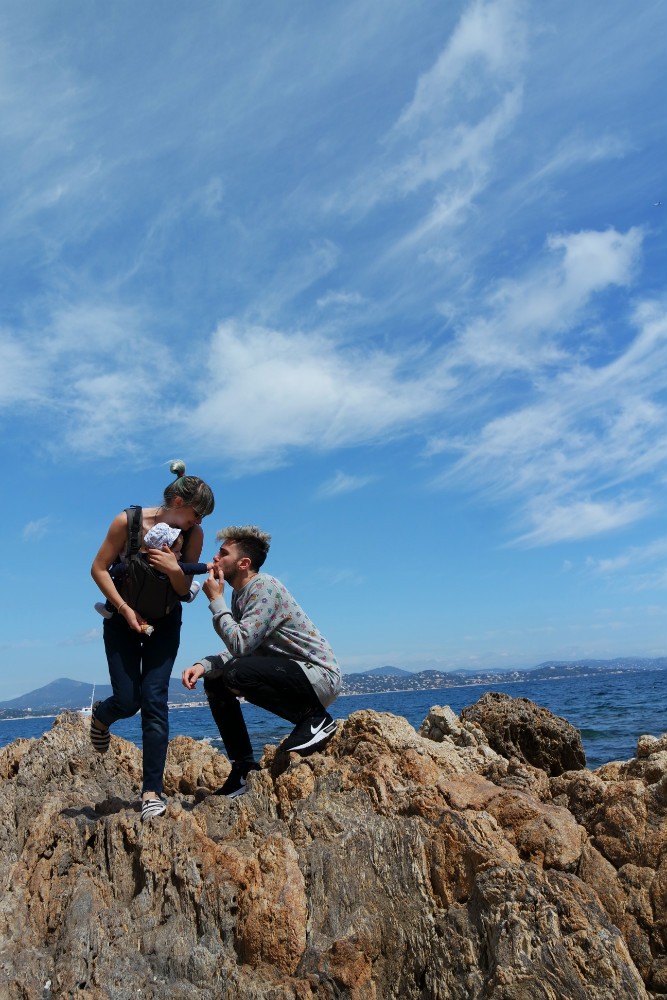 But I was completely amazed to get there and discover that, in fact, Saint Tropez is far more than the image in the press and across the Internet. That, in fact, all the madness we see on TV is just a small part of the whole region.

The city itself is very beautiful, medieval, a former fishing village, where the streets smell of lavender and people are always smiling.

I was very impressed by the relaxation and the joy of the people of Saint Tropez. I’m talking about the Tropeans, people who were born and raised there. Those who, despite being invaded by tourists over the years, rejoice that a small town of only 6.000 people can gather hundreds of thousands of people from all over the world, annually. 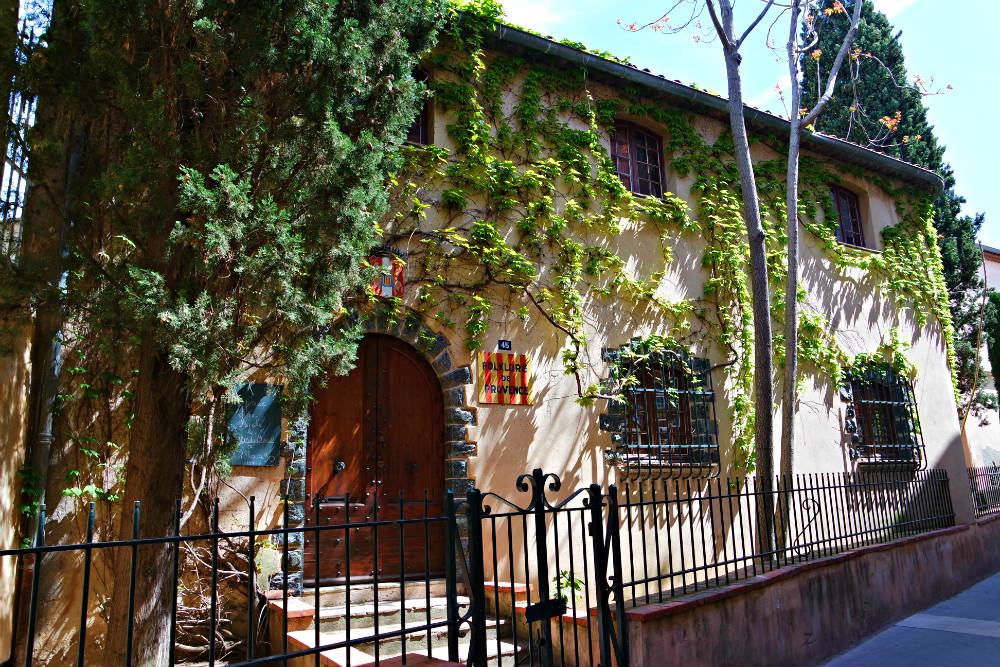 Sure, we also find luxury shops on narrow, colorful & scented streets. There was no way to miss them.  But why didn’t anybody tell me that I can also find here some super-chic cafes or restaurants that are family business? Where prices are not at all as big as you would expect … 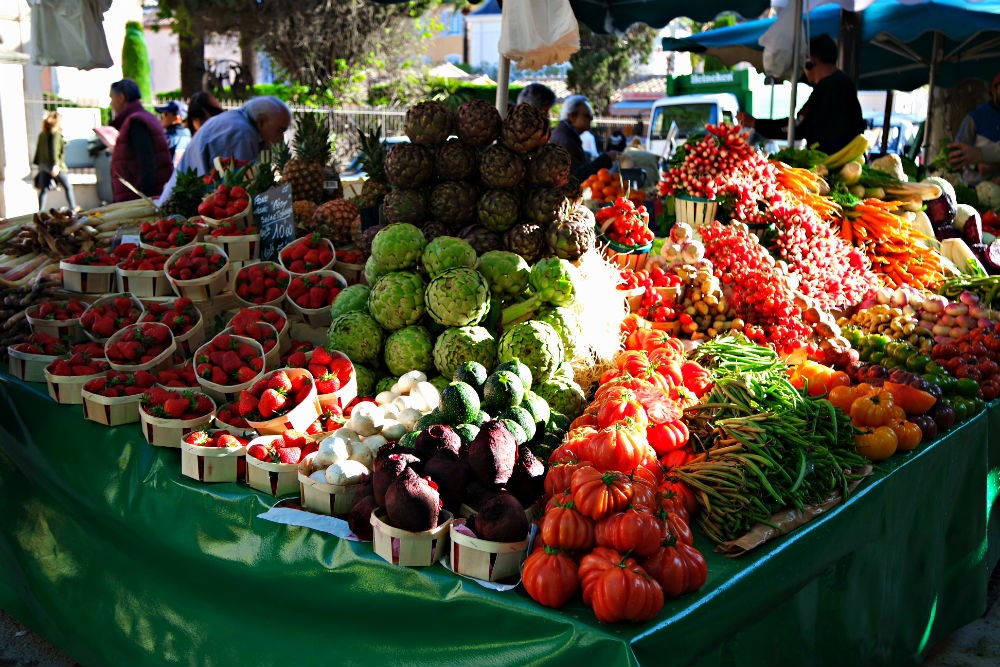 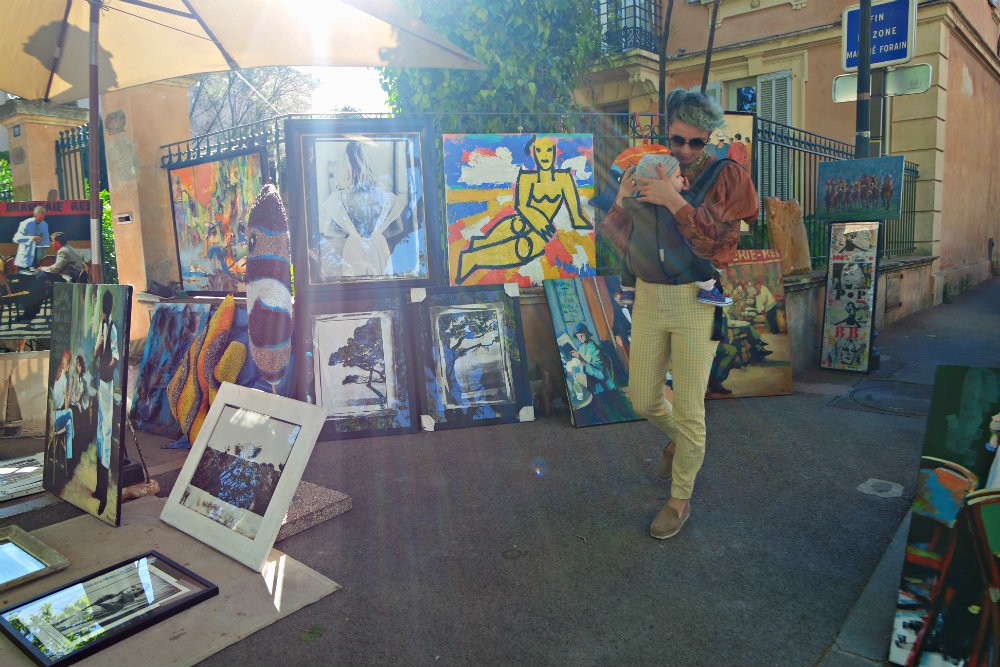 Why didn’t anybody tell me that there are flea fairs on Sundays where you can get a lot of super cool stuff at excellent prices? Or that on Tuesdays and Saturdays they build a pop-up market, where you can buy a bunch of things, from fresh fruits and vegetables, cooked food, clothes or even accessories of all kinds? 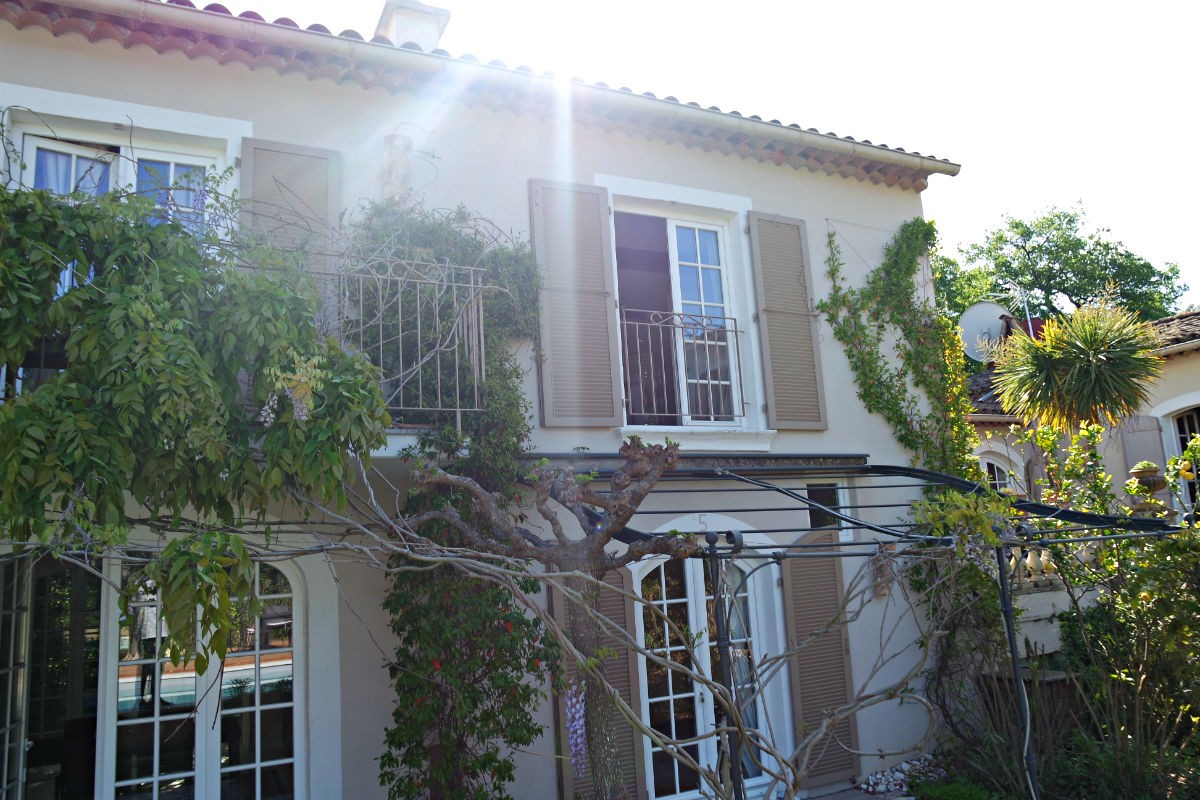 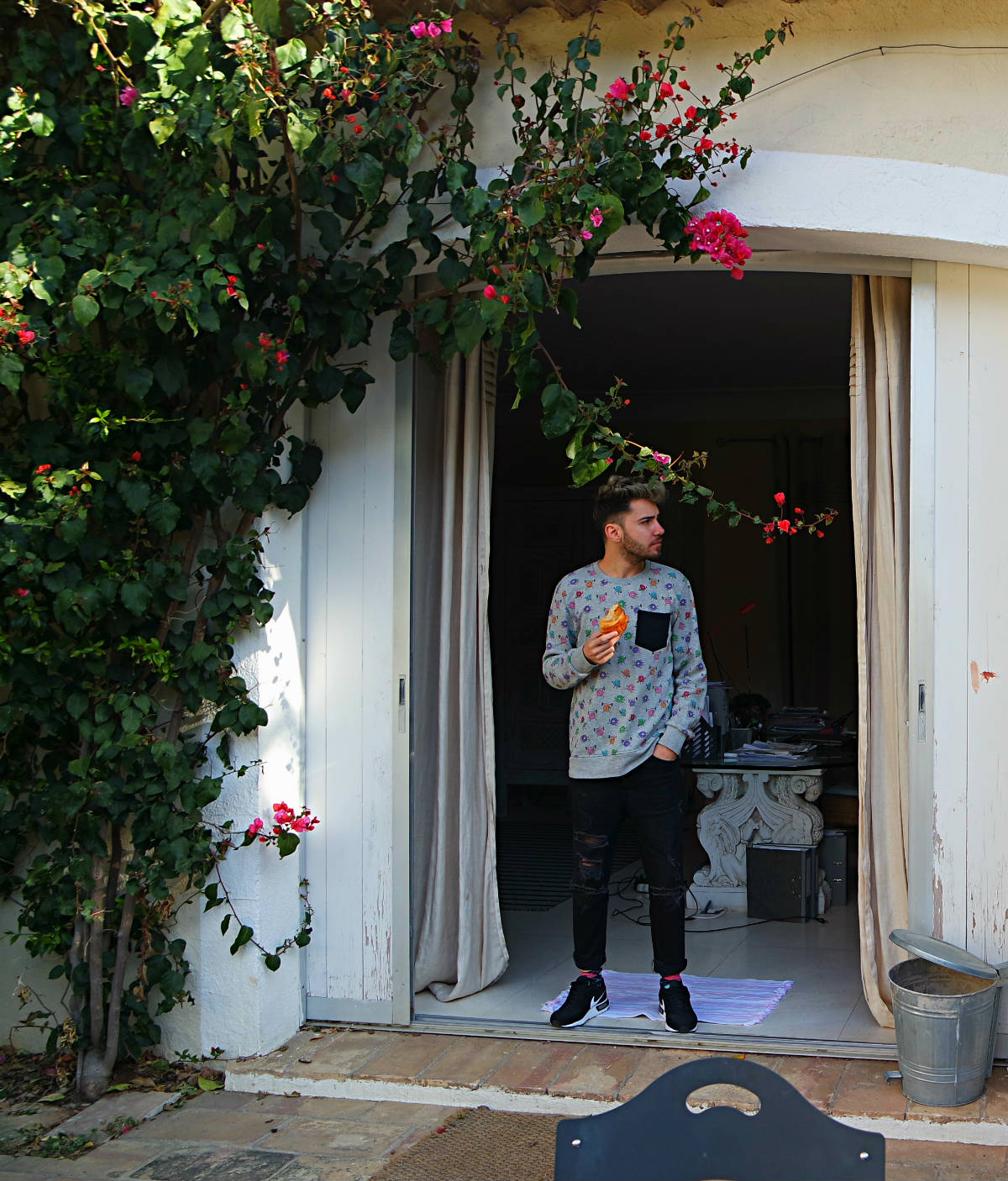 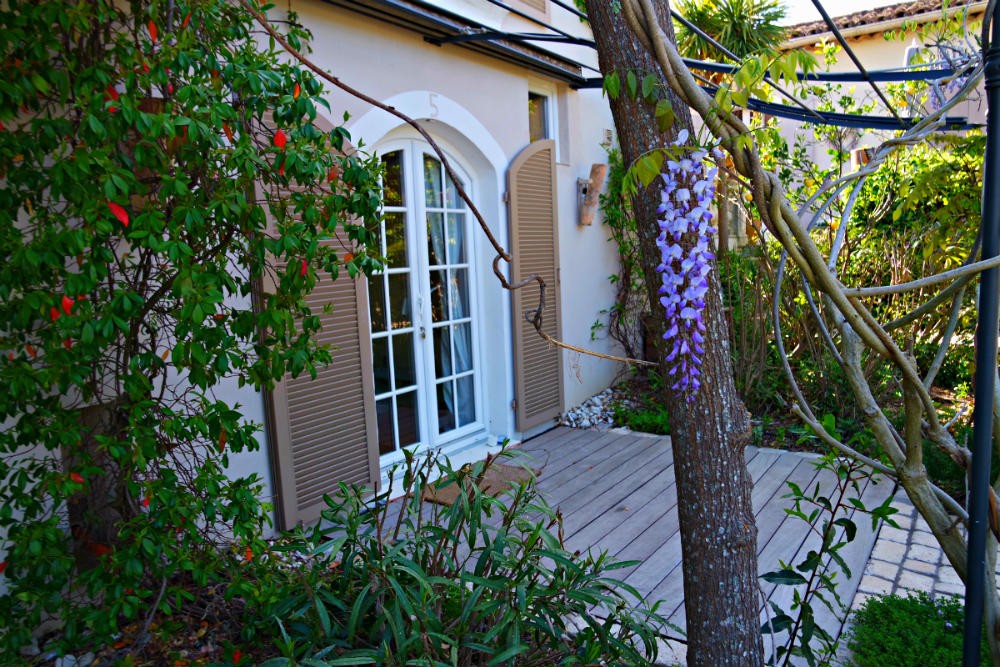 In Saint Tropez life simply seems to be problem free!

Why didn’t anyone tell me it is a very quiet and super clean town? I honestly tell you that I was about to go bare feet. In fact, Ana actually did that. She’s even cooler than me. 🙂

We traveled through the city with the urge to discover new narrow streets, other small family businesses of various kinds, and other people who love to smile. Because in Saint Tropez life is simply worry-free. The truth is that I think I would be the same. What reason would I be angry with? :)) 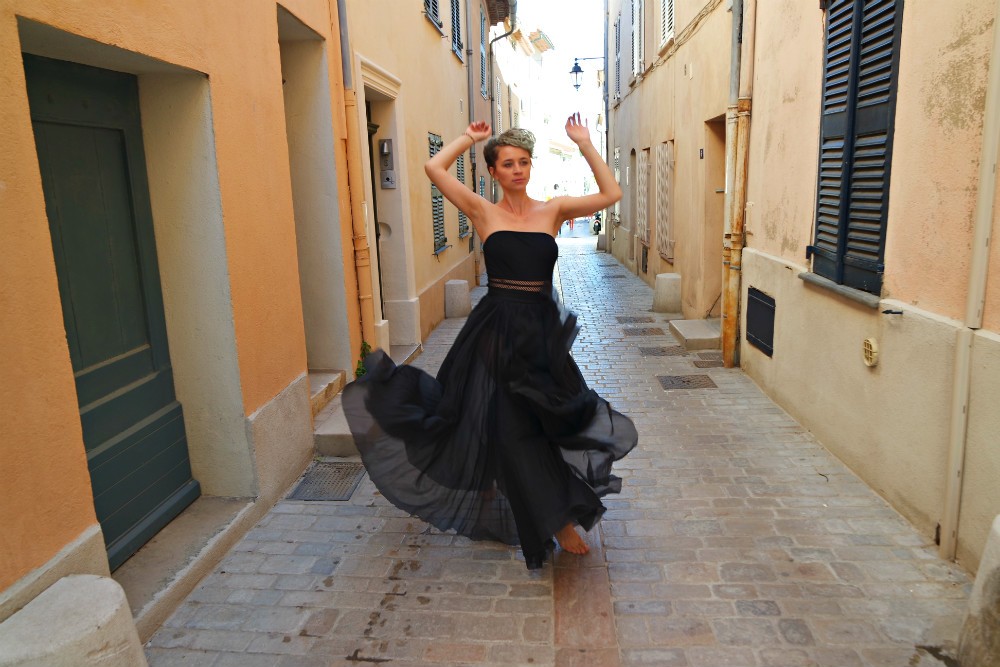 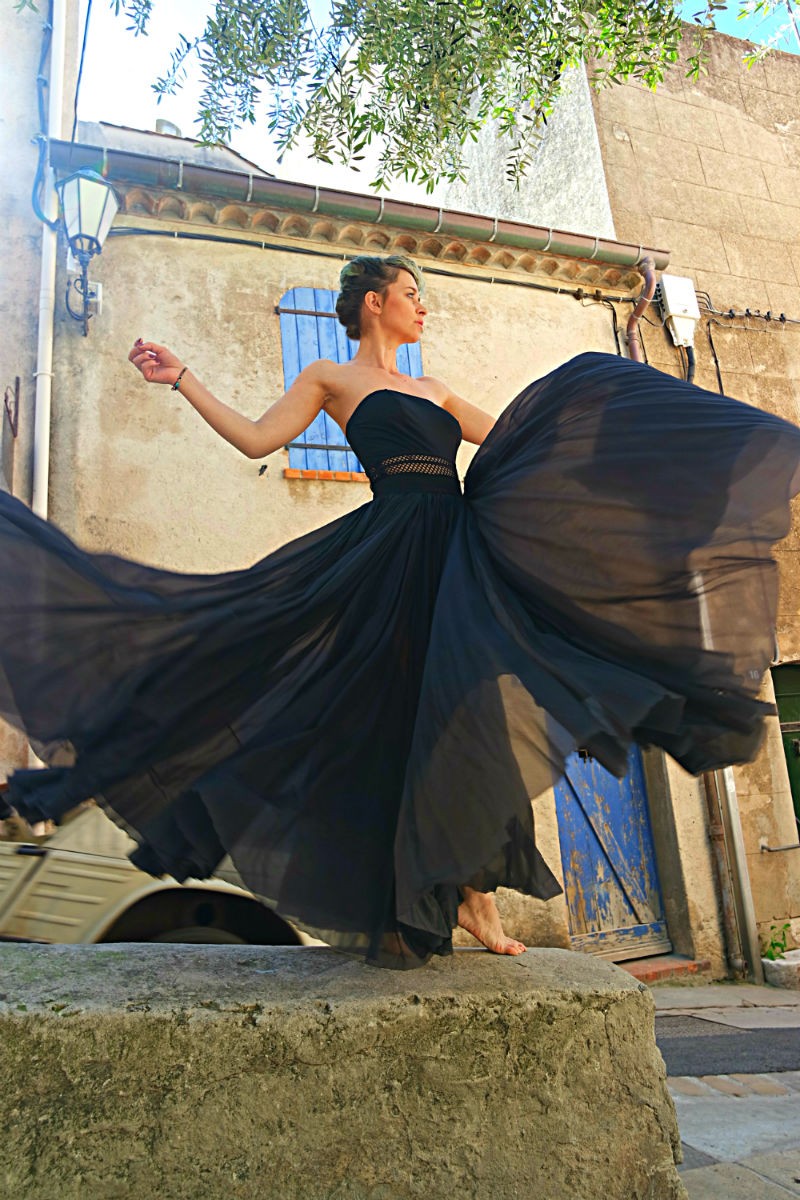 A little history of Saint Tropez!

Saint Tropez was, until the beginning of the 20th century, a fishing village and also a military fortress. It was also the first coastal city to regain its independence during the Second World War. The first name of the town was Heraclea-Caccaliera, being baptized by the Romans who had possessed the territory somewhere around 39, before Christ. 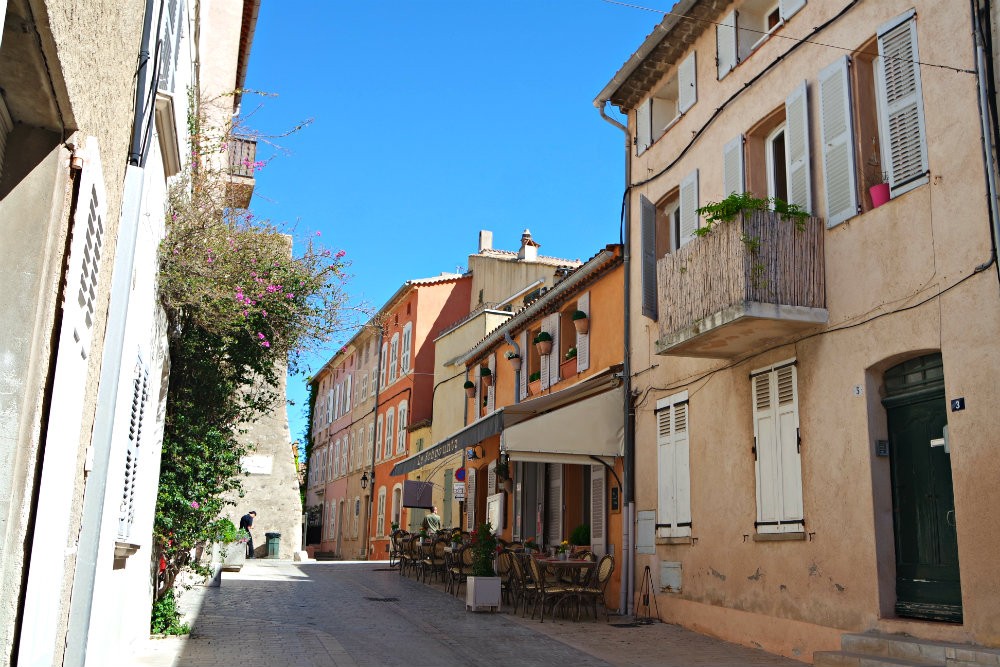 In the 9th century, it was named Saint Tropez, after the martyr Tropes. There is not much to know about this martyr, but the legend surrounding him is very interesting.

Tropes was a servant for an emperor called Nero, who was Catholic. Tropes went to Christianity, and the emperor asked him to give up this religion. The servant refused that, so he was beheaded. 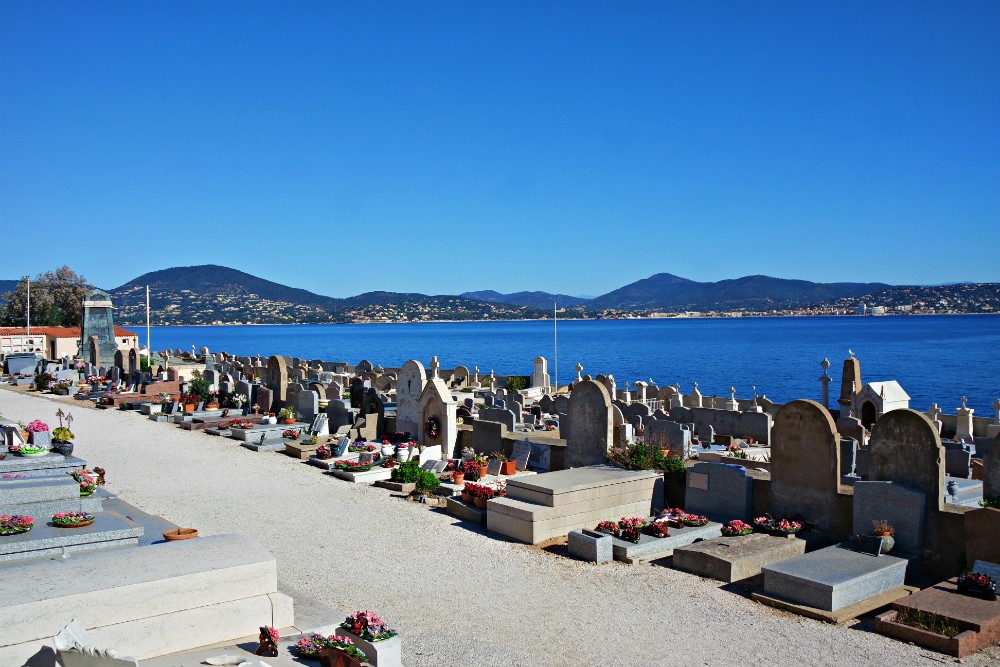 His body was put on a rotten craft, which was let loose on the sea, along with a dog and a cock.

The goal was to feed the animals from the human body. But this did not happen, nor did the boat break, so it finally came to the city that would eventually get the name of the martyr.

A woman with special talents, Celerina, had a premonition in which Tropes, the boat and the animals appeared. She foretold their arrival in the city and indeed the boat has reached the shore where the cemetery is now.

The locals decided to rename the town of Saint Tropez, in honor of the one who appeared in the dream of Celerina.

The cock flew to the city now called Cogolin, and the dog went to the village that now bears his name, Grimaud. I was in both villages and I can tell you that they are very beautiful. I can’t wait to tell you about them, too! 🙂 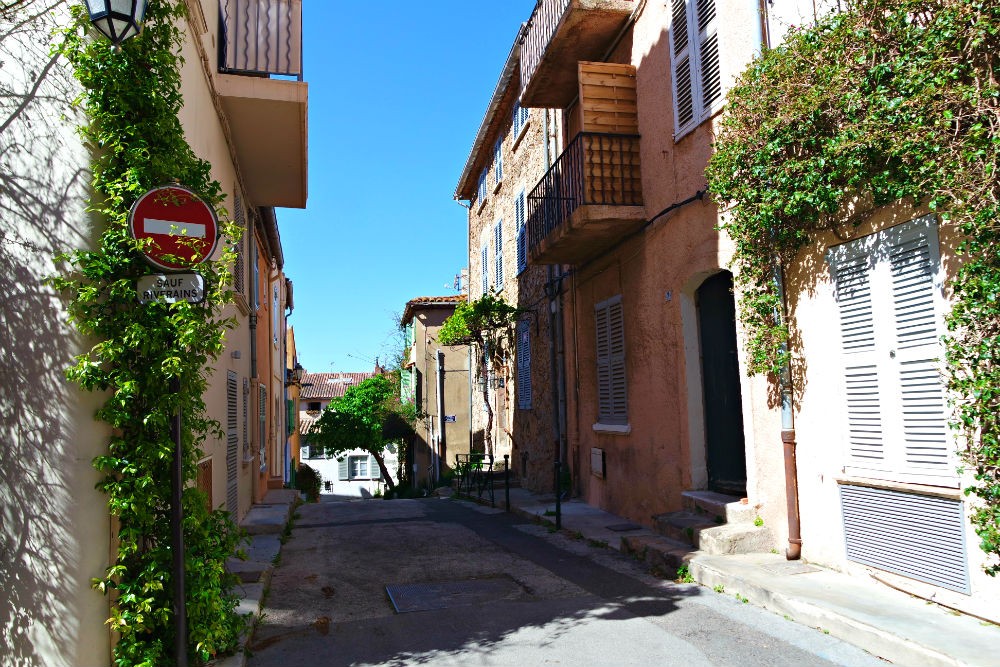 Well, here’s how Saint Tropez turned out to be a great surprise for me, and the whole holiday in the South of France one of the most beautiful in my life.

The city is super family friendly, you don’t have to spend a lot of money if you know where to look for restaurants, it’s also super nature friendly, it’s … what you need! It’s #coolerthanyouthink

I can’t wait to tell you about the other wonders we have discovered on this trip, soon! 🙂

Don’t forget we can also meet on Facebook and Instagram, where I have prepared a lot of other cool things, too! 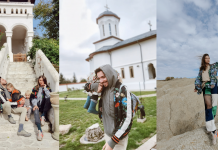 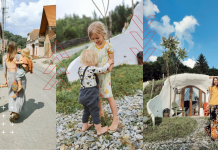 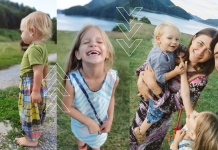 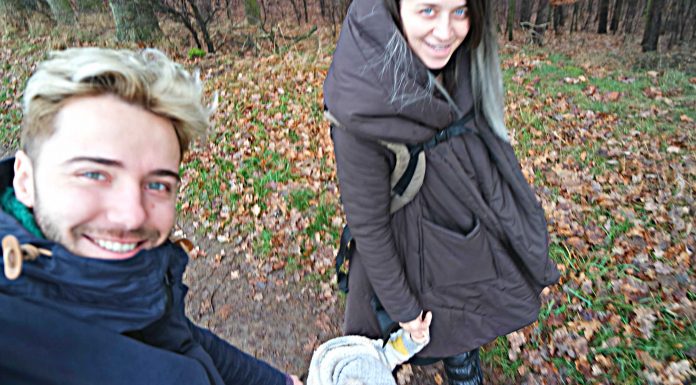